Located 5 miles west of downtown Altoona, the Horseshoe curve was built to get trains over the Allegany Mountains, instead of the almost impossible task of trying to get through them.  Built by the Pennsylvania Rail Road in 1854 as an engineering marvel at the
time.  The park opened for public use in 1879, making this more or less, the original railfan park...although it was built for the general public, not just for the enjoyment of railfans.  The park was accessible 24-hours a day by a very difficult stairway until 1989, when the National Park Service & the Railroaders Memorial Museum decided to develop the site as its seen today.

The developed site has its pro's and con's, no longer do you have to walk the stairs, an incline plane will transport you to / from the top.  The site now has restrooms and a gift shop.  The grounds are kept in excellent shape, and NS helps out by keeping the brush
trimmed around the curve for excellent view of the trains by the visitors.  Those are the "pro's".  Visits to the curve are no longer free (yes, you still have to pay if you walk the stairs), and there are limited hours that this seasonal tourist attraction is open.  I wish it would be open year round (schedule: daily April to October).   But, still it’s worth a visit!

What you will see is the triple track mainline, and mountain railroading at its best.  Many trains use helper engines to help shove them west up the mountain, or for breaking on eastbound trains.  It’s an awesome experience seeing and hearing a heavy freight train running in "notch 8" around the curve.  NS runs about 60 freights a day over the curve, plus 2 Amtrak trains, and numerous deadhead moves of helper engines going to pick up their next train.

Site Details:  A National Historic Landmark, set up as a tourist attraction, there are 2 levels (parking lot level and a track level), gift shop, restrooms and cafe bar on the lower level, tracks & picnic tables on the track level.

Lighted for evening railfanning: No, closed at night, check hours before visit.

Motels / Hotels:   There are no railfan motels in Altoona, several chain named lodging can be found in Altoona.
Altoona, Pennsylvania - Altoona RailWalk

Located in downtown Altoona behind the Station Medical Center (formally Station Mall) & Altoona Railroad Memorial Museum.  This "railwalk" was built with the idea of train watching.  Park benches, lighting as well as some covered shelters connect overhead
pedestrian bridges that span over the tracks.  This is a good area to watch & photograph trains.  You are usually not alone train watching at this location!

Railroad(s): Norfolk Southern / Amtrak.  The Amtrak station is across from the RailWalk, Amtrak's Pennsylvanian
stops twice a day (one each way daily) both during daylight.

Site Details:  To explain it simply, it’s a sidewalk along the railroad tracks protected by a 4-foot high chain link fence.  There are a couple of benches which have a awing over them.  Lampposts provide a great amount of light at night, so nighttime railfanning is welcome (there are usually other fans watching trains as well at night).  Parking spots along the RailWalk let you sit in your car while you’re waiting for the next train.  The RailWalk connects to three overhead bridges, 17th Street which is also an automobile bridge, and two pedistrian bridges, one which is open, and one that is enclosed accessed by stairs or elevator (the later is only open certain hours, and maybe closed during cooler months).

Restrooms on site: No.  There is a McDonalds within walking distance.  Other places such as a Sheets mini-mart is a short drive.

Food: None on site.  McDonalds is within walking distance from the Rail Walk.  Subway is located inside the Station Medical Center.

Picnic Area:  No, but a few park benches are located along the RailWalk.

Parking: This has become a recent problem (in 2017).  Most of the parking spots along the RailWalk (belong ? to the medical center).  Medical Center security has been enforcing "permit only parking" along the tracks.  I've been told by a medical center manager, train-watchers can park near the west end of the lot (closer to ALTO tower).  They have been putting notes on peoples windshields to apply for a parking permit for automobiles without one.  I have not witnessed any automobiles getting towed, but that could just be a matter of time.  Parking is available at the railroad museum which shares the same parking lot as the medical center however it's not track-side.  During weekdays spots along the tracks fill up fast, not by train watchers, but staff & patients of the medical center.  Weekends and evenings I do not believe the medical center security has had an issue with train-watchers in any area along the RailWalk (send us a note if I'm mistaken).

Motels / Hotels:  There are no railfan motels in Altoona, but several motels are located just down the interstate at the Frankstown Road, and West Plank Road exits, both about a 10-minute drive from the RailWalk. 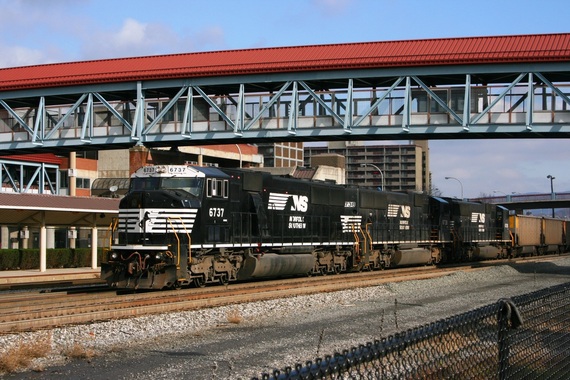 The photo was taken from the RailWalk. Both the enclosed walkway (pictured), and the open pedestrian walkway (seen in the back
round) are connected to the rail walk, and offer increased vantage points of photography. 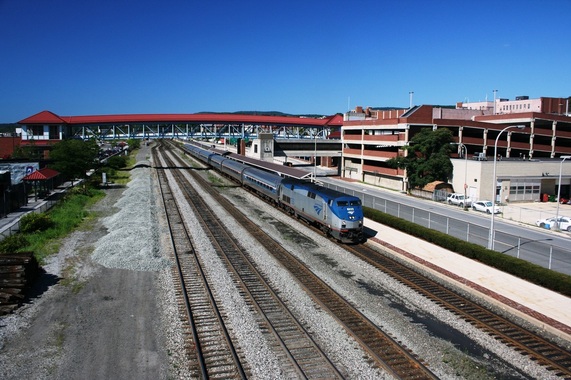 Amtrak train # 44, the Pennsylvanian, is seen making its station stop at Altoona
station.  The photo was taken from the "open" foot bridge.  The RailWalk is seen to the left.  The Memorial Railroaders Museum is just out of the view to the left (on the left side of the RailWalk). 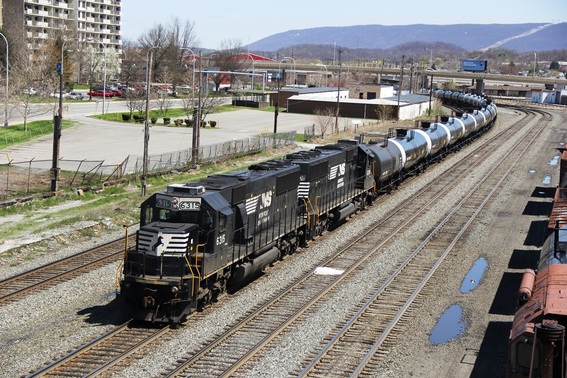 Norfolk Southern's SD40E helper locomotives trail a eastbound loaded oil train.  These locomotives will cut off just around the curve at CP-WORKS.  WORKS is usually the eastern point for helpers for trains over the mountains.  Helper locomotives can be seen past the RailWalk every hour every day!  The helpers make the amount of trains seem much higher.  Altoona sees about 60 freights a day pass through, not counting helper moves. 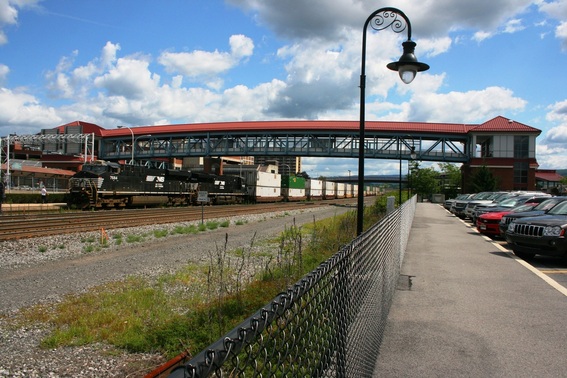 A westbound double stack train passes the
RailWalk.  The 4-foot high fence along the RailWalk is seen here.  The parking lot of the medical center is seen here.  Weekdays it’s difficult to find a parking spot along the tracks as both employees and patients use these great train-watching parking spots.
Evenings & weekends the parking lot is open.
The RailWalk is lighted and you will usually not be along for evening railfanning. Grab some dinner and head on down to the Altoona RailWalk! 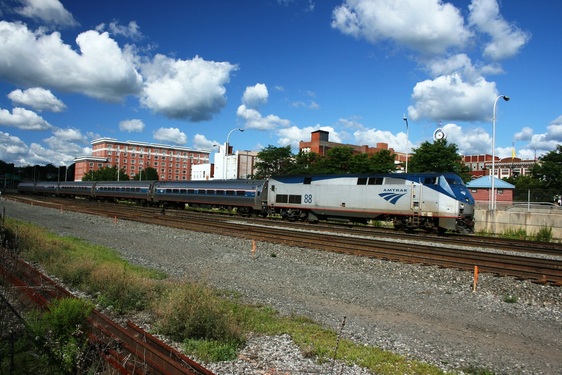 The daily eastbound Amtrak train # 44 (NS symbol # 04T) is about to arrive the Altoona Amtrak station (just out of view to the right).  The Amfleet train usually runs with 5 or 6 cars.  Sometimes you can catch private cars on the rear, or one of Amtrak's special painted locomotives leading the train!  Sun light during the morning hours and early afternoon is excellent for photography from the RailWalk. 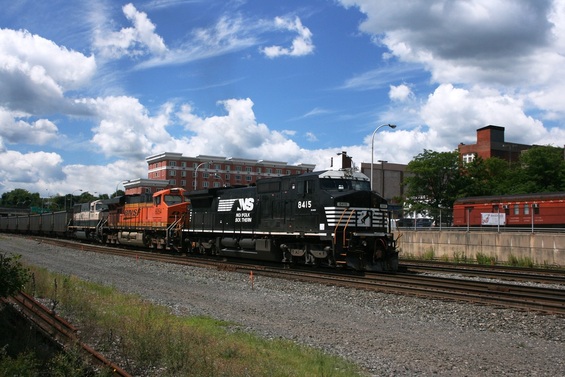 Coal trains and foerign power are common on the Middle Division.  Here a eastbound coal train powered by a couple BNSF owned locomotives bring a train of Poweder River Basin coal to the east coast.  On this line, Norfolk Southern owned locomotives need to lead all trains due to the cab signal requirements on this line.  Amtrak locomotives also have the required cab signals. 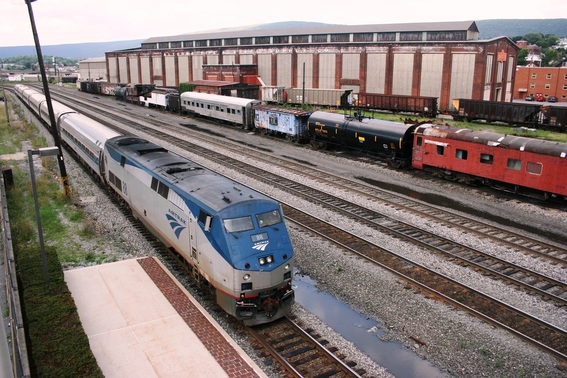 Late afternoon sun light on the RailWalk side of the tracks is not good for photography.
This is where the open pedestrian bridge comes in handy.  Amtrak’s train # 43 (NS symbol # 07T) arrives Altoona station with its
normal 6-car Amfleet consist.  The train set that runs west one day will return eastbound the next morning.  Hint, if a special lcomotive (Heritage unit) runs west on 07T, be sure to catch the 04T the next morning!  This photo looks east from the open pedestrian bridge.
The old train cars seen in the photo belong to the railroad museum as well as the shiny tank car that was donated by the local UTLX car shop that is located just down the track.  The
large building pictured is Altoona Pipe & Steel, a rail car repair & rebuilder.  The open hoppers seen near the building are cars in for repair.