Built in 1903 it once handled a high volume of rail traffic as the Grand Trunk Western and Ann Arbor railroads crossed at the station.  At its peak, 42 passenger, 22 mail, and 78 freight trains passed through Durand on a daily basis. It serviced almost 3000
passengers a day. The station was added to the National Register of Historic Places on June 6, 1971.

In 1974, because of declining traffic and rising costs, Grand Trunk decided to close the station.  The building and site were purchased by the City of Durand in 1979 and it was brought back to its  former glory.   The station was also selected by the Michigan legislature
to  serve as the home of the Michigan Railroad History Museum. It is a popular viewing location for railfans, and houses a model railroading club, a ballroom, and a gift shop. During the Durand Railroad Days Festival in May, a lunch counter operates in the station, reminiscent of its glory days.

In 1981, Amtrak once again began using the station building as a waiting room.  This un-staffed Amtrak stop is serviced twice daily by Amtrak's Blue Water (trains # 364 and # 365).  Amtrak's station code for Durand is DRD.  Note that even though Durand is referred to as a  "city", it’s really a small town with a population of less than 4,000.  There is  not a motel or car rental location near the station.  As a matter of fact, Durand didn't really have lodging until Quality Inn built a motel on the other side of town a few years back.  Its a few miles away from the station, near I-69.

My opinion on Durand.  There are only around 20 trains that pass through Durand during a 24-hour period; most of those  are CN freights.  Some say the number is higher, but I've never seen it, maybe  I've just been there on slow days?  I don't know.  There are plenty of busier  train-watching spots a few hours south of here on the NS / CSX (i.e., Berea,  Fostoria, Deshler, OH, and Elkhart, IN).  Why do I keep returning to Durand?   Atmosphere!  The trade-off between lots of trains and just a nice, quiet place  to watch trains!  The station is beautiful inside and out, there are picnic  tables outside, a warm waiting area inside the station, or you can just sit in  your automobile and wait for the passing trains.  For those who like to bare the  outdoors, approaching trains can be seen from the platforms well in advance from  three directions.  The fourth direction (west from Chicago), you can listen for  distant train horns.  Durand itself is a quiet zone, so keep an eye on the other  three lines.

Another draw to this line is the traffic mix on CN.  For those of you that spend a lot of time railfanning CSX, NS, UP and BNSF, I find the train consists vary on this line.  Most of these trains are going / coming from Canada.  Beside seeing a lot of CN owned cars that usually don't leave their system, double stack trains also have a large amount of CN containers and other thing's you don't usually see in the rest of the US.  By the way, if you think you will only see CN owned locomotives here, think again.  Every time I visit Durand, coal trains (and empty hopper trains) are powered by either Union Pacific or BNSF power.  During my most recent visit in December 2011, I was lucky to have seen the Illinois Central business car train powered by IC 101 + 102, with 3 passenger cars (2 IC paint, the 3rd CN paint).

Rail Traffic: Expect 20+ train's during a  24-hour period.  Two Amtrak passenger trains that normally operate double ended  (engine on each end of the train).  The rest are freight.  CN trains operating  on the GTW mainline move fast.  For safety, protected by a 4-foot high iron  fence.  It’s not a big deal to photograph passing trains.

Site Details: Train watching from the low  level platform around two-sides of the train station.  The diamond (2 tracks x 1  track) cross at the station, corner of the platform.  Three connecting tracks on  three of the four sides of the diamond are all viewable from the station, one of  which runs in front of the station next to the parking lot.  Station building  has a restored waiting room, and home to Michigan Railroad History Museum which  will explain any questions you may have.  There is also a small gift shop.

Restrooms on site: Yes, Inside train station (when open).

Food:  None on site or within walking  distance.  A drive to downtown to a couple of sit down restaurants, or a drive near I-69 will find a few fast food restaurants (Hardees’s, McDonalds, Subway).

Lighted for eveing railfanning: Yes.  (not  sure if the lights stay on all night).

Motels / Hotels: There are no railfan motels  in or near Durand.  The closest motel is a Quality Inn located next to I-69  Durand exit. 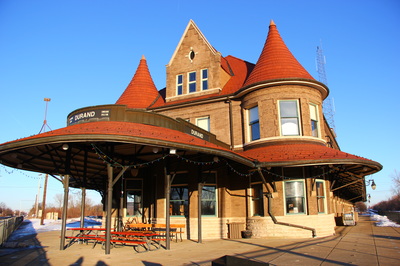 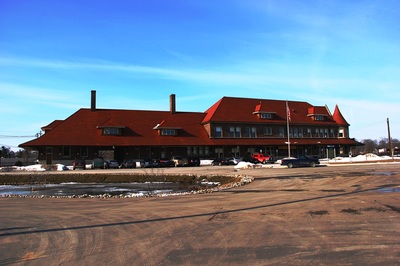 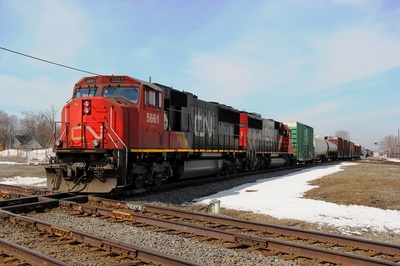 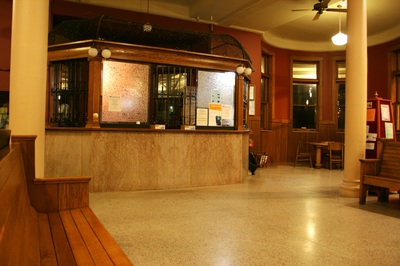 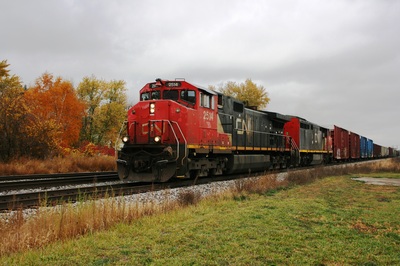 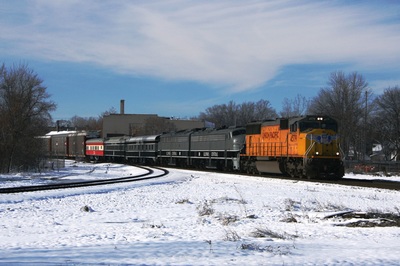 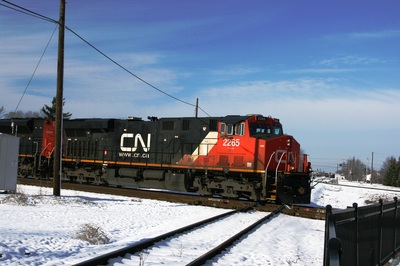 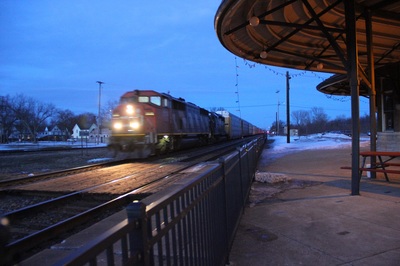 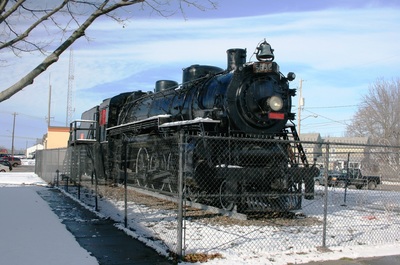