Located about 60 miles south of Atlanta,  Manchester is a small town (considered a city for the area).  Just behind the classic sleepy downtown row of shops, the city built a covered gazebo to watch trains.  Manchester is where the Waycross main splits, the line north is the Atlanta Main, and the line west is the Birmingham Main.  All trains that pass through Manchester will pass, or at least be seen from the gazebo.  Since the viewing platform is on the south side of the tracks, lighting for pictures is good most of the day.  There is one issue that puts Manchester a bit lower of my  list of favorite train-watching locations.  The track closest to the viewing platform, called "the runaround", is often as a siding for trains looking to recrew, or at times a local freight may drop their train on it.  This may
completely block your view of other passing trains.  Don't worry, you’re not totally dead in the water...a two minute walk onto the roadway overpass will get  you in a good spot to photograph the passing trains.  Trains roll slow through Manchester, so you will have enough time to reposition yourself.  Another drawback from this location is the amount of trains that pass daily.  Expect about 40 trains during a 24-hour period.  Rail traffic is open to everything CSX  moves.  Some highlights include the Tropicana Juice trains, and
deadhead  locomotives being moved to / from the CSX shop in Waycross, located south of  Manchester.

Rail Traffic: Expect about 40 trains during a  24-hour period.  In my recent experience (2011), mid days have been slow.  You  can expect to see any type of train CSX moves.  Merchandise, intermodal  (including double stacks), coal, grain, automobiles, and orange juice trains.   Deadhead locomotives to / from Waycross shops may also be seen on a daily  bases.

Site Details:  Located along the parking lot  behind the Main Street row of shops, its situated in a quiet area.  The gazebo  includes two picnic tables.  It can get very hot here, if A/C is needed, you can  sit in your car and wait for trains from there, you can see everything from the  parking lot.  A short walk onto the Broad Street (Route 85) bridge will offer  good view for photography.  There are pedestrian walkways on both sides of the  bridge; automobile traffic over the bridge is active, but not too  busy.

Restrooms on site: No.  A 10-minute walk or a  quick drive can land you at McDonalds, or a mini-mart.

Food:  None on site.  A McDonalds, Subway and  a mini-mart are just a short drive away.

Parking: Yes, free parking next to the  gazebo...it’s actually the town parking lot for downtown Manchester....don't  worry, its not a busy parking lot, there are always spots!

Lighted for evening railfanning: Yes, but only  one bulb currently works (2011).

Scanner Frequencies: 160.590   The gazebo has  a control to listen to the railroad radio, although during my last visit, it  didn't work too well.  Bring your scanner to be safe.

Motels / Hotels:  Manchester does have 2  motels (Days Inn & ??, both do not offer railroad views).  Warm Springs, GA  is the next town north, its a tourist town with additional motels. 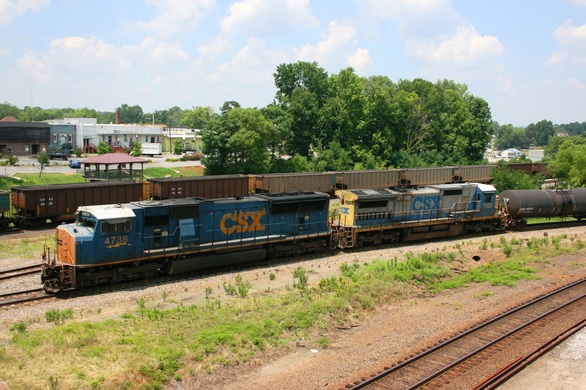 A eastbound CSX train passes the viewing platform seen behind the coal train.
The parked coal train blocked my view of this train, had I stayed on the platform.  The bridge over the tracks is useful at times like this. 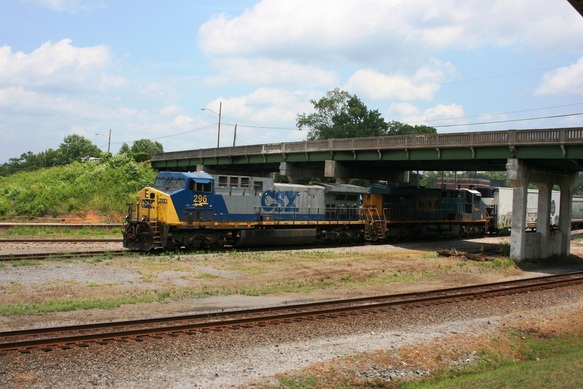 A clear mid-day view of a westbound CSX train passing the platform.  This shot
was taken from the gazebo.  The over pass seen to the right side of the picture
has side walks on both sides of it, its a great place to take picture from, and
its not an overly busy roadway. 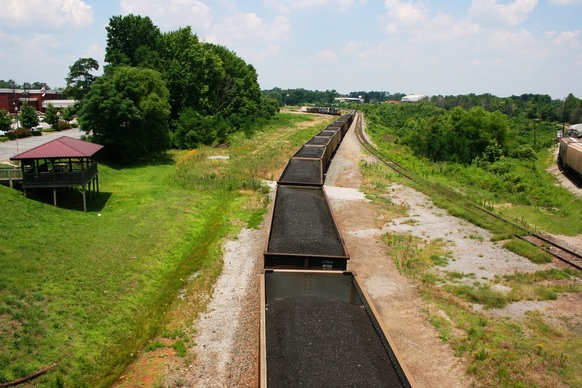 This picture taken from the Broad Street (Route 85) highway overpass shows the
Gazebo to the left with a train passing on the runaround.  The Atlanta Main can
be seen to the right side of the photo. 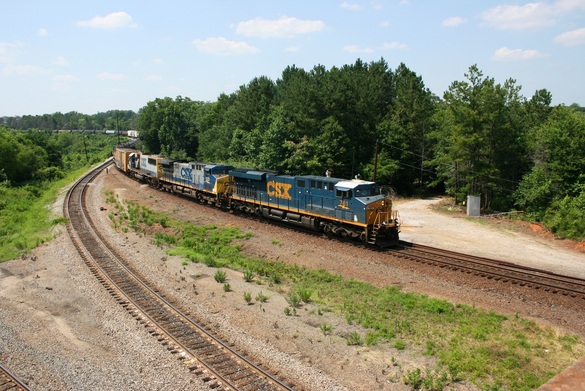 Another shot taken from the highway bridge shows a eastbound train from Birmingham swinging around on the Atlanta main.  The train will stop several hundred feet after I took this photo, for a recrew at Manchester Yard. 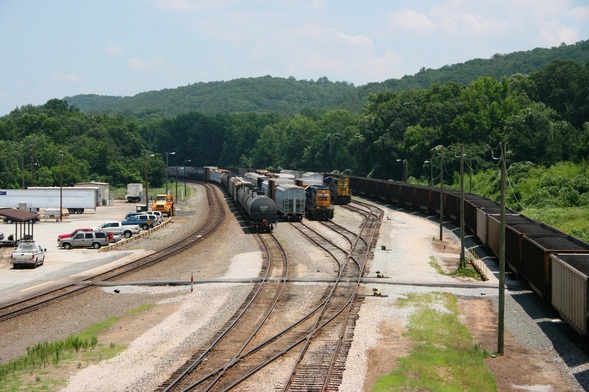 A photo taken from the east side of the bridge shows Manchester Yard.  Its a small yard that keeps itself busy by a few daily local trains.  Todays yard power consists of a SD40-2 and a SD60M.  Both were shut down at the time I took the photo.  The track to the left is the main track to Atlanta, most through trains use this track. 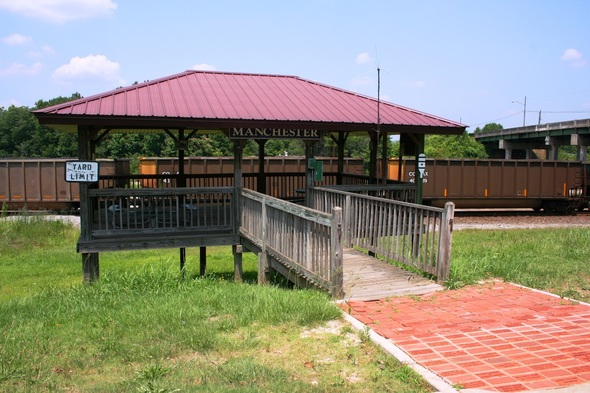 The Manchester Train Watching Gazebo is complete with picnic tables, lights and a
scanner to listen to the radio chatter of passing trains. The radio helps out a lot since you can not see signals from this location. Trains call signals which help you know that a train is coming. I always visit Manchester in June (during a business trip), and I have to say - this place gets hot! In between trains watch out for wildlife! I've seen a deer and a lizard from the gazebo!